Freedom Riding School is a RS(Riding School)that does english and westurn riding.It also has dorms, where it's students stay at and go to school.

I need 4-6 ft jumps set up! Madison said as she trotted into the ring. She watched the jumps being set up and started walk/trot/canter warm ups. As she started walking around she could tell Sunrise was anxious to jump and tried to make her wait as long as she could so she could at least finish warming up. She trotted then cantered and went around the ring a few times. When they were done warming up she whispered to Sunrise I know your ready and you've done a god job with being patient so I'm gonna let you jump. She patted her neck and sat up. They headed for the 4ft first and went over that with ease. They jumped over the 4.5ft,the 5ft, and and two 5ft right after each other. Last was the 6ft and she pushed Sunrise forward to take the jump. They cleared it and were on the other side with no worries. She slowed to a walk. I love you so much Sunrise! You've never jumped a 6ft before I'm so proud of you! Madison leaned down and hugged her mare. She then headed for the barn to cool off Sunrise. 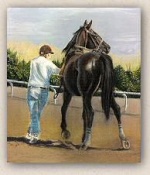 Gabby walked into the ring riding Storm. Since she did a jumping work out with him the day before, she was going to do more working on stamina, and dressage, along with control, and maybe a few cross rails, to get him conditioned up. She walk, trot, and cantered him with a loose rein. She then switched and did the same. She then repeated the process with collection in both directions. She then did side passes, half halts, lead changes, diagnels, pieaffes, pirouettes, and other dressage moves. After that, she gave Storm his head, and walked him around. She then decided to work on speed, so she cantered him around the ring and everytime they fully made it around, she made him go faster. Eventually she slowed, and free walked him for 10 minutes. Then she jumped off, and lowered all the jumps to low crossrails. She then began jumping him over those, messing with his gaits, control canter, gallop, trot, extension, collection, ect,ect,ect. Storm then truly got tired, and she cooled him down then walked out to a trail ride.

Gabby returned from the trail ride and played with Storm in the arena.

Ella mounted Nightmare and walked him around. He spooked around a bit. Then she trotted him into circles, diganles, and over ground poles from the previous horse. Soon they were canter and doing lead changes. Ella smiled. She was now going to work on reining. She loved to rein in a english saddle it was much more challenging. She released one hand. Nightmare then shapened up prepared for some reining. With the slightest touch Nightmare was spinning. He took off at a gallop then slid to a stop. He swrived to the right and started cantering. He did a slow and fast spin. Then with the slightest shift of weight, Nightmare cut to the right, then the left. She backed him up then stopped and patted him. She took both reins in her hand then tapped the elbow of her horse's front leg, and to the next they were doing the spanish walk. She stopped him then she tapped her foot right on the girth and he reared up, he held it as long as he could then went done and back up. She then tapped both sides, and he leaped into the air. Then she qued him to stand quiet then she tapped his shoulder and he bowed down. She slid of his neck, and gived him a little push. He laid down. She laid down next to him and kissed his nose, then got in the saddle and gave a sqeeze he stood up. she leened foward and he bolted forword and jumped the arena fence. She then trotted off on a trail.